Chemical recycling – snapshot of a technology everybody talks about 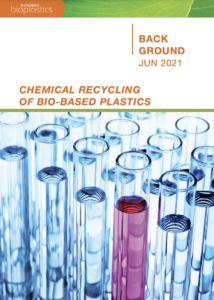 Chemical recycling has gained increased attention as a promising recovery technology, especially for post-consumer plastic waste. It is seen as a complementary solution to mechanical recycling, being better suited for difficult to recycle plastics like multi-layer solutions or heavily contaminated plastics. Yet, its availability at commercial scale is currently still limited, and a legislative framework at European level still needs to be established.

The term chemical recycling, also known as feedstock or tertiary recycling, comprises different varying technologies that convert plastic waste into an upstream feedstock resulting in secondary raw materials that have the same quality as virgin materials. This recovery technologies provide an opportunity for plastic waste streams that generally are not mechanically (or otherwise) recycled. In this way, waste is directed away from landfill or energy recovery towards higher quality recycling. However, chemical recycling is still facing economic and technical challenges, which have an effect on their potential for commercial development in Europe.

The industry association Chemical Recycling Europe defines chemical recycling as “any reprocessing technology that directly affects either the formulation of the polymeric waste or the polymer itself and converts them into chemical substances and/or products whether for the original or other purposes, excluding energy recovery”. Chemical recycling can be distinguished into two major groups of processes: chemical depolymerisation and thermal depolymerisation. Chemical depolymerisation is a process in which plastic is broken down into oligomers or monomers through a chemical reaction. The technique allows the plastic material to be chemically recycled again and again, since new virgin polymers can be produced after each depolymerisation. Thermal depolymerisation is a process in which the plastic waste is heated up either in the absence of oxygen or with limited oxygen. It produces a feedstock that can be used for chemicals as well as fuels. However, only material-to-material recycling is suitable for the concept of plastics recycling.

Having started with little success in the mid-1990s, in recent years, the interest in chemical recycling in Europe has grown significantly. Now, different actors, including start-ups, universities, and companies, are working on the development of these new technologies. So far, only very few companies in Europe reached commercial scale. To achieve profitability, large investments into new plants and large amounts of suitable plastic waste streams are necessary. However, with the demand for recycled plastics expected to increase in the coming years, chemical recycling can be a valid option for post-consumer waste streams in the future. Particularly since mechanical recycling often has difficulties reaching the required qualities.

A specific regulatory framework for chemical recycling does not yet exist in Europe but there are several (legislative) initiatives that could affect these technologies. Initiatives include the EU Waste Framework Directive which refers to chemical recycling in its definition of recycling. However, the definition is only limited to plastic-to-plastic recycling and excludes plastic-to-fuels technologies. Although the current EU Regulation on recycled plastic materials and articles intended to come into contact with foods only refers to mechanical recycling, the envisaged revision of the European waste legislation will probably lead to the establishment of more consistent definitions. On the Member State level, attitudes towards chemical recycling vary considerably. Whereas the Netherlands, for instance, appear to be open these new technologies, there seems to be some reluctance in promoting such innovative recycling methods in Germany. The European Commission has also initiated a study that aims to develop methods to measure the recycled content of the produced plastics and chemicals, including chemically recycled material.