Currently, bioplastics represent about one percent of the more than 368 million tonnes of plastic produced annually*. But as demand is rising, and with more sophisticated biopolymers, applications, and products emerging, the market for bioplastics is continuously growing and diversifying.

New and innovative biopolymers, such as PLA (polylactic acid), bio-based PP (polypropylene) and PHAs (polyhydroxyalkanoates) continue to show high growth rates. In 2019, bio-based PP entered the market on a commercial scale and will have more than quadrupled in 2025 due to the widespread application of PP in numerous sectors. PHAs are an important polymer family, whose production capacities are estimated to increase almost tenfold in the next five years. These polyesters are 100 percent bio-based and biodegradable in several environments, and feature a wide array of physical and mechanical properties depending on their chemical composition.

Currently, biodegradable plastics altogether, including PLA, PHA, starch blends and others, still account for almost60 percent (over 1.2 million tonnes) of the global bioplastics production capacities. The production of biodegradable plastics is expected to increase to 1.8 million in 2025 especially due to PHA’s significant growth rates and new investments for PLA production in the US and in Europe. 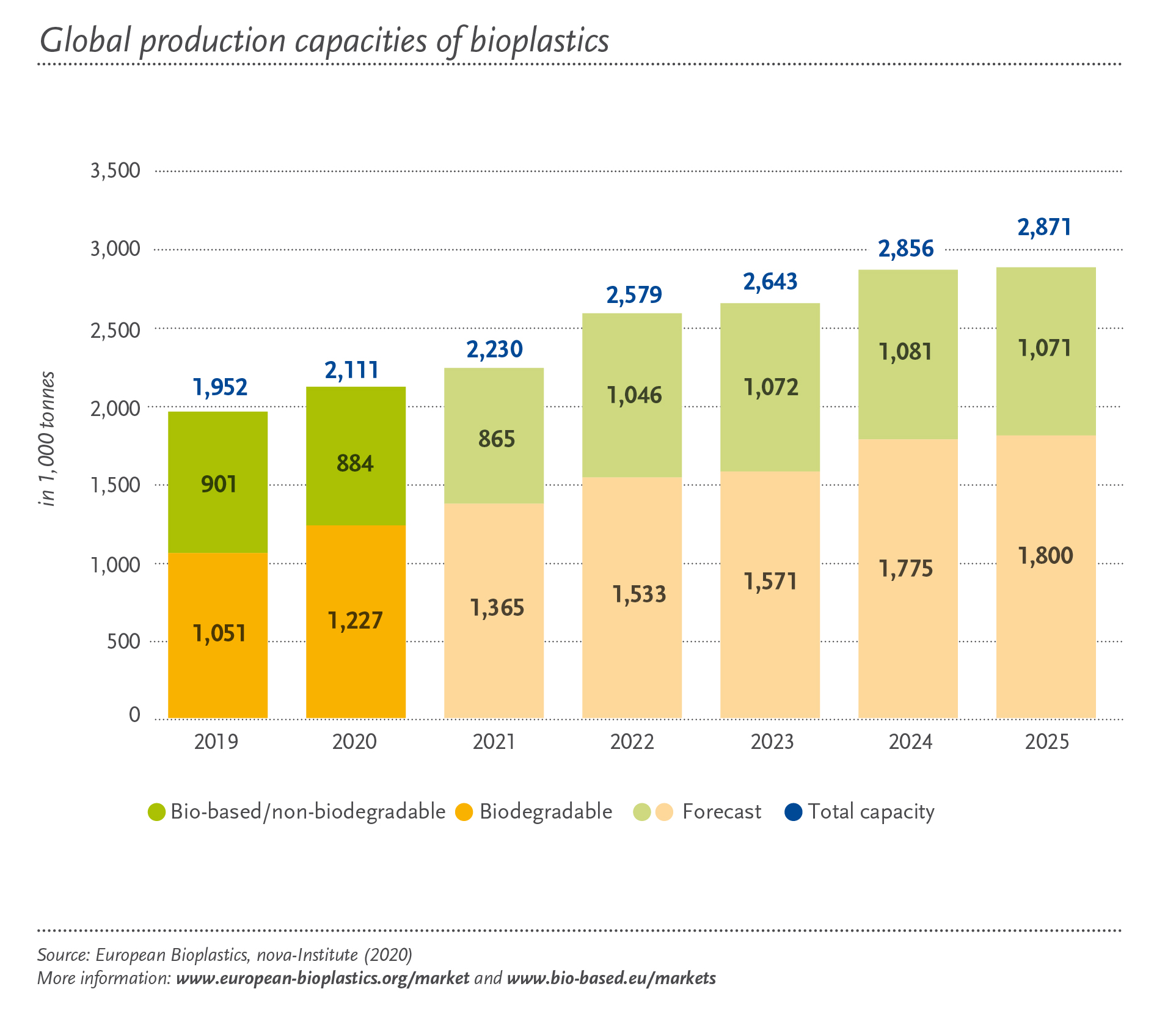 Bio-based, non-biodegradable plastics altogether make up for just over 40 percent (almost 890 thousand tonnes) of the global bioplastics production capacities. These also include drop-in solutions like bio-based PE (polyethylene) and bio-based PET (polyethylene terephthalate), as well as bio-based PA (polyamides). Their share is predicted to slightly decrease even further to just over 37 percent in 2025 (around 1 million tonnes) as the forecast for biodegradable plastics production shows a higher level of growth. Production capacities for bio-based PET also continue to decline as they have not been nearly realised at the rate predicted in previous years. Instead, the focus has shifted to the development of PEF (polyethylene furanoate), a new polymer that is expected to enter the market in 2023. PEF is comparable to PET but 100 percent bio-based and is said to feature superior barrier and thermal properties, making it an ideal material for the packaging of drinks, food and non-food products. 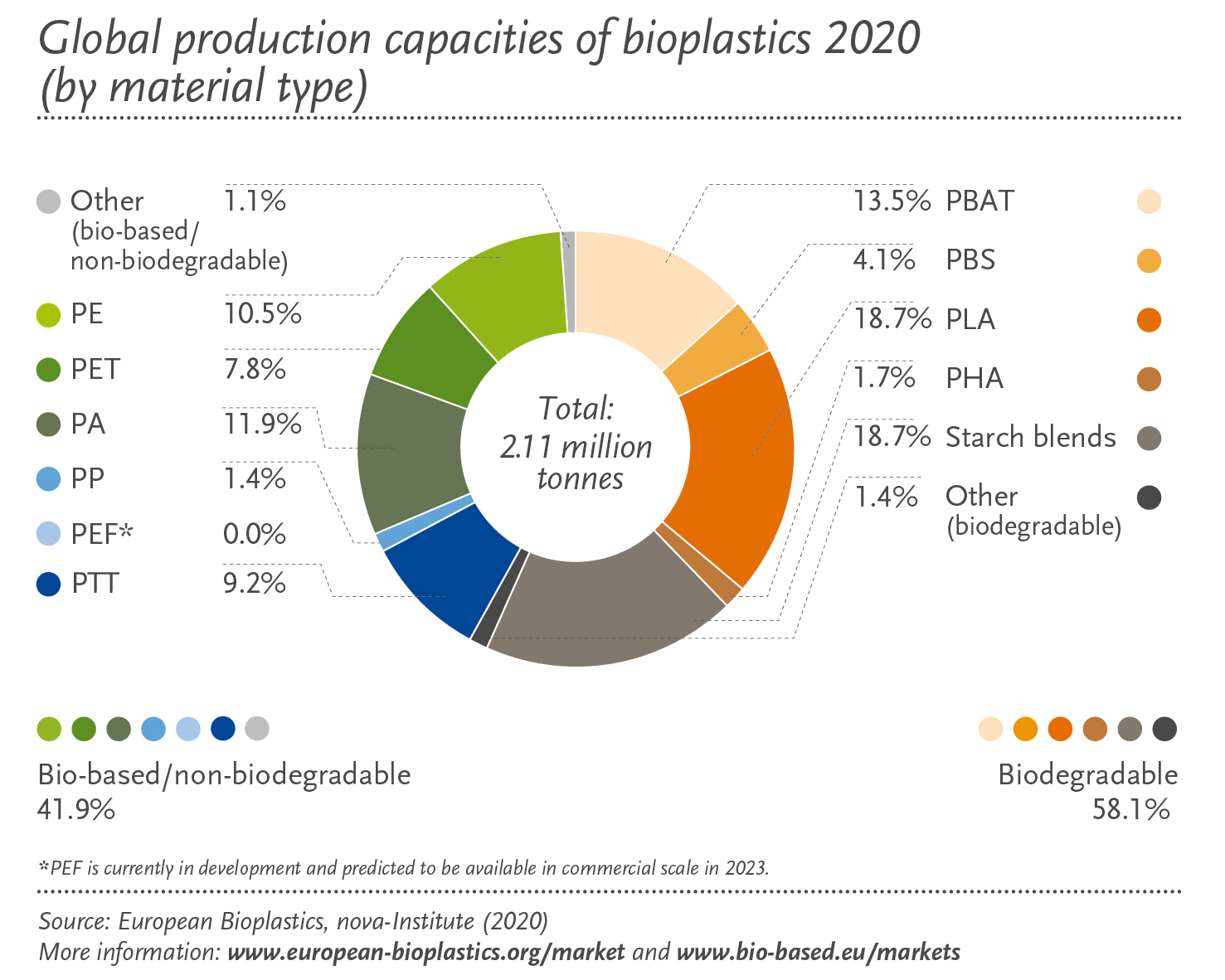 Bioplastics are used in an increasing number of markets, from packaging, catering products, consumer electronics, automotive, agriculture/horticulture and toys to textiles and several other segments. Packaging remains the largest field of application for bioplastics with 47 percent (0.99 million tonnes) of the total bioplastics market in 2020. However, the portfolio of application continues to diversify. Segments, such as automotives & transport or building & construction, or electric and electronics remain on the rise with growing capacities of functional polymers. 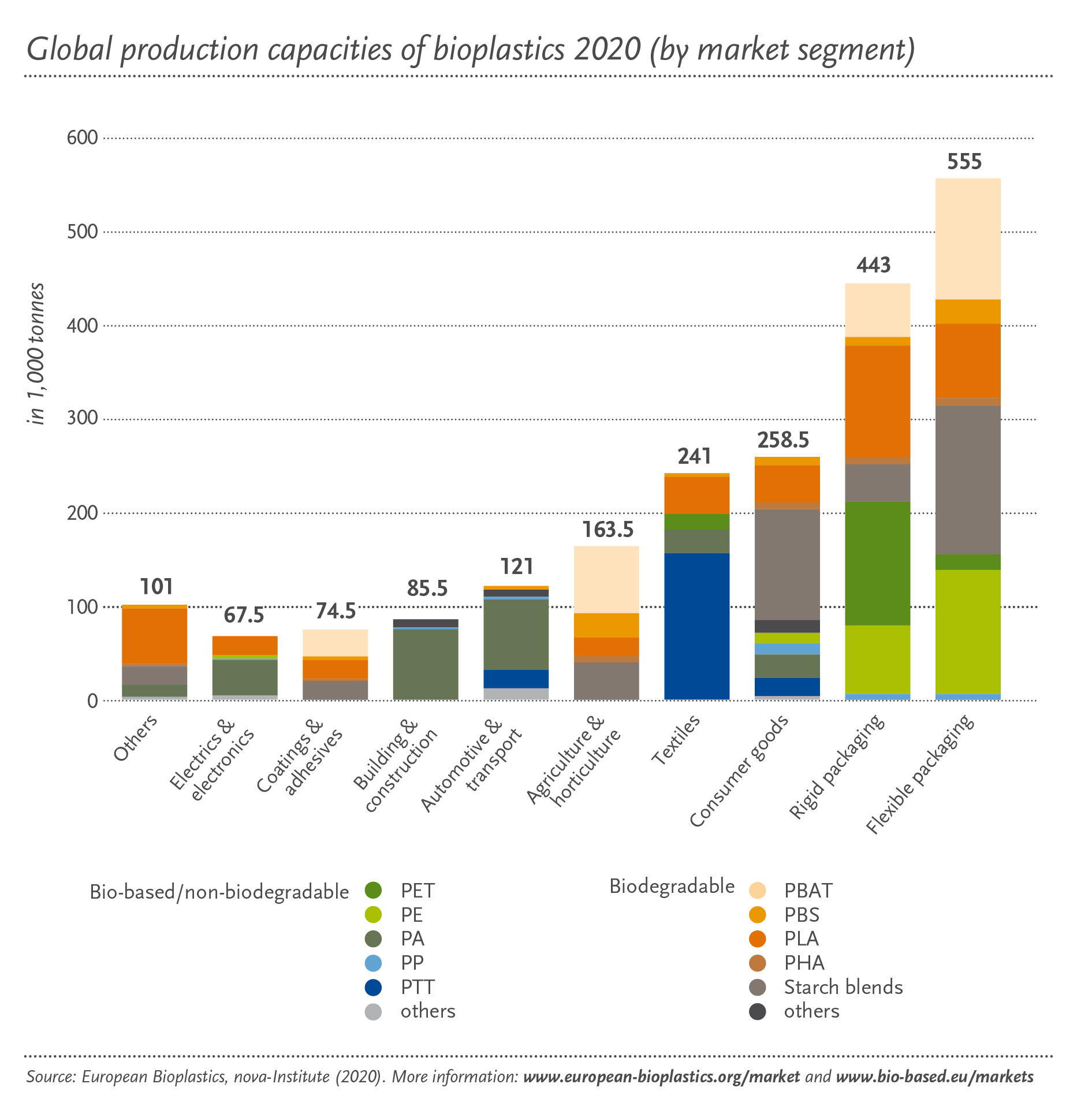 Europe strengthened its position as a major hub for the entire bioplastics industry once again; it ranks highest in the field of research and development and is the industry’s largest market worldwide. By now, one fourth of the global bioplastics production capacity is located in Europe.

However, with a view to the actual production of bioplastics and regional capacity development, Asia continues to be in the lead. In 2020, 46 percent of bioplastics were produced in Asia, and the region will remain being the major production hub over the next five years. However, production in North America will slightly increase from 17 percent in 2020 to 18 percent in 2025. 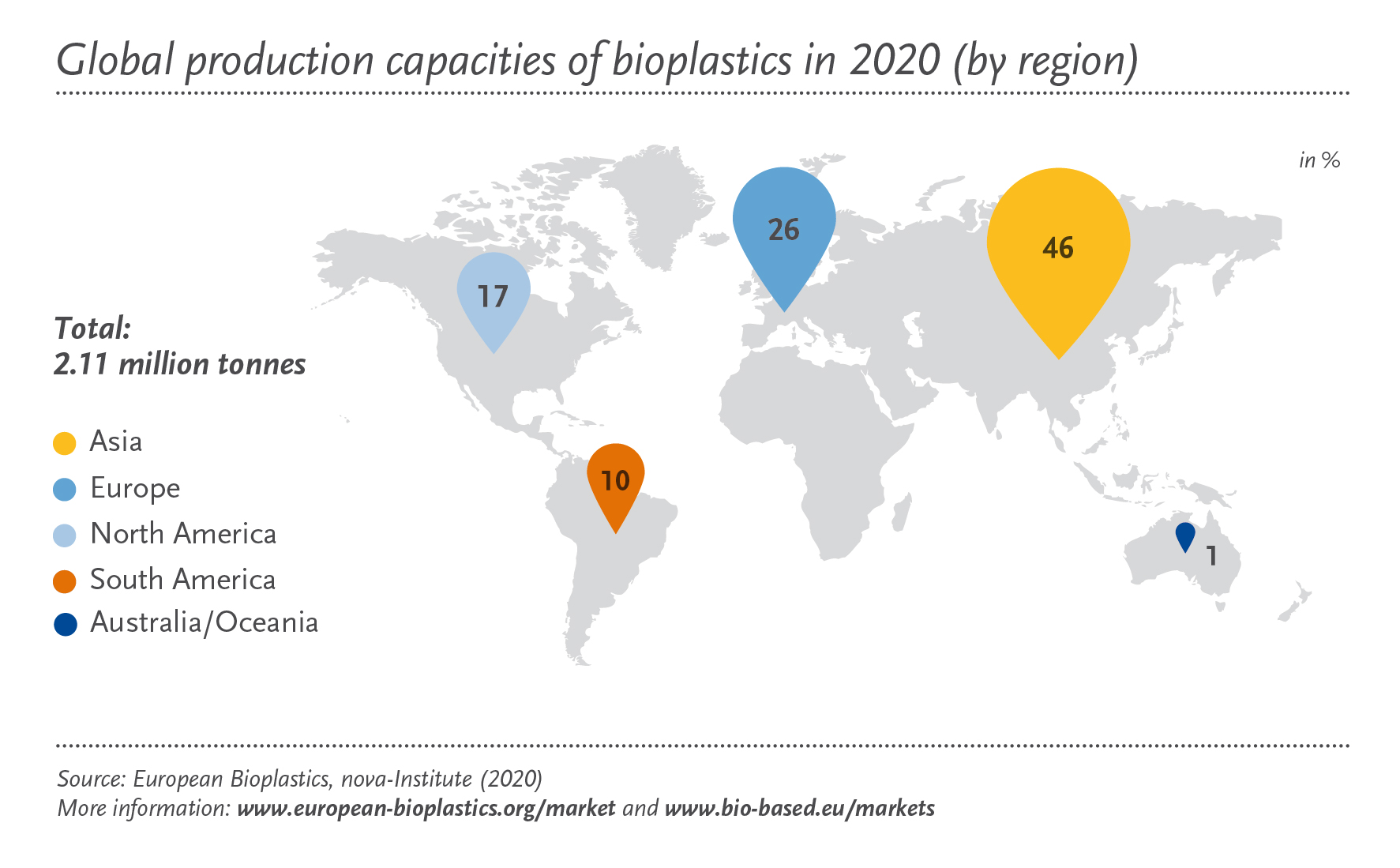 The land used to grow the renewable feedstock for the production of bioplastics amounted to approximately 0.7 million hectares in 2020. This accounts for 0.015 percent of the global agricultural area of 4.8 billion hectares of which 94 percent were used for pasture, feed and food. Despite the market growth predicted in the next five years, the land use share for bioplastics will only slightly increase to 0.02 percent. This clearly shows that there is no competition between the renewable feedstock for food, feed, and the production of bioplastics. 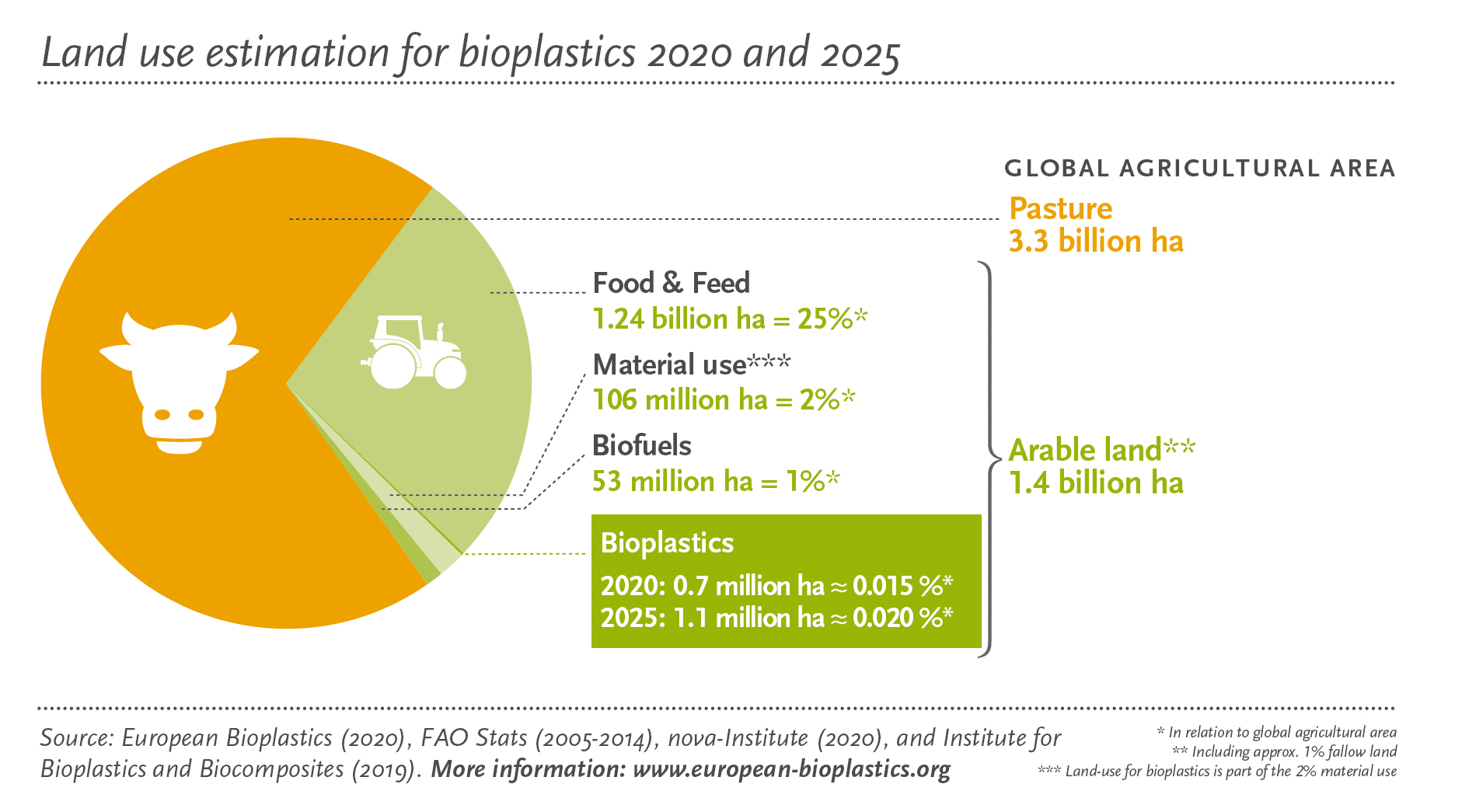