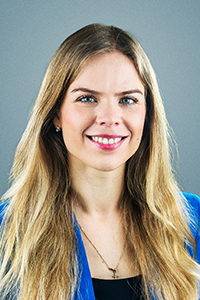 European Bioplastics (EUBP) is very pleased to announce the appointment of Maria Neguț as the association’s new Head of EU Affairs who assumed her position on 14 March 2022 and is based in Brussels. Maria follows Joanna Dupont-Inglis who very successfully represented the interests of the bioplastics industry until February 2022. “In the name of European Bioplastics and all our members, I would like to thank Joanna for all the great work and efforts she contributed to help improving the environment for bioplastics in Europe”, said Hasso von Pogrell, Managing Director of EUBP.

Now, the association as well as our members are happy to welcome Maria on board of the EUBP team at this time of crucial importance. With the Green Deal casting its shadow ahead, setting up the path for the European Union’s transition to a real resource-efficient economy, bioplastics are poised to play a significant role. “Maria joins a great team of EUBP experts that continuously evaluates the benefits of bio-based as well as biodegradable and compostable products which aim at reducing negative climate impacts”, says François de Bie, Chairman of EUBP. “She is the right fit to explain policy makers in Brussels the role bioplastics can play to help achieving the EU sustainability goals”, he adds.

Maria who can look back on several years of working in and with European institutions, is eager to take up the challenge. “I am thrilled to be joining EUBP at such a key moment for the bioplastics industry. With the Green Deal ambitions to transform the EU into a circular, climate neutral, modern, and competitive society, our industry will be playing an essential role in supporting the green transition”, she says. Maria will make sure that EUBP continues to play an active part in the discussions impacting the bioplastics sector by engaging with EU policy makers and the broader range of stakeholders.

Prior to joining European Bioplastics, she held several positions at the European Parliament and the European Commission. Most recently, Maria worked with the European Cocoa Association (ECA) where she served as EU Affairs Director Sustainability for over five years. Besides holding a Master’s degree in Political Sciences and European Affairs from the Université Libre de Bruxelles as well as a post-graduate degree in International Organizations from the European Academy of Diplomacy (EAD), Maria is also a recognised Certified Sustainability (CSR) Practitioner. She was an active member of the EU Commission’s Expert Group/Multi-Stakeholder Platform on Protecting and Restoring the World’s Forests, including the EU Timber Regulation and the FLEGT Regulation. In addition, she was a member of the CEN TC415 – tasked with the development of the first international standard ISO 34101 on sustainable and traceable cocoa. On a regular basis, Maria is contributing to think-thank projects and writing on topics linked to sustainability, energy, and EU policies.