Global warming impacts of different products and processes from life cycle assessment (LCA) perspective is widely performed with standardized methods. Global warming impact assessments in LCA are, typically, carried out by using GWP factors for different greenhouse gas emissions. However, there are also multiple additional indirect impacts to global warming through impacts of these emissions. This paper shortly discusses a possibility to include also these indirect impacts to future GWP assessments using methane release from permafrost regions as an example. Similar indirect impacts (both positive and negative) are also caused e.g. through soil carbon losses due to desertification and higher carbon sequestration of forests due to warmer climate. There are also other indirect impacts from climate change in addition to global warming such as temperature rise, changes in rain patterns, ocean acidification, extreme weather events, and rising sea levels.

Figure 1. presents a basic idea of how greenhouse gas emissions indirectly impact on methane release from permafrost regions through global warming. This leads to additional global warming impacts, which are not currently included in GWP factors. The author is aware that there are probably challenges in creating this kind of indirect additions due to lack of exact data. To tackle climate challenges, understanding of these processes would be crucial. As far as the authors of this draft document are aware, these secondary or indirect impacts have not yet been holistically studied and assessed although individual studies are available which monetize or otherwise measure the impacts of climate change. 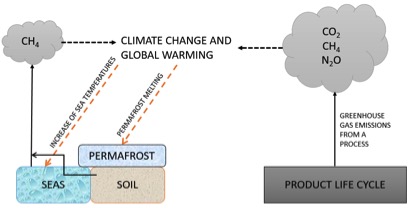 According to Marzeion, et al. (2018), 1 kg of CO2 in the atmosphere is able to melt 15 kg of glacier ice within 100 years period. According to EPA (2016), warming in the Arctic leads to permafrost thaw, which can increase soil carbon dioxide and methane emissions, thereby contributing to further warming.

However, there is still a lack of knowledge on how global warming impacts on methane release. According to measures by Shakhova et al. (2014), partially thawed permafrost injected 100–630 mg methane m−2 d−1 into the overlying water column. Shakhova et al. (2010A) fears that remobilization to the atmosphere of only a small fraction of the methane held in East Siberian Arctic Shelf (ESAS) sediments could trigger abrupt climate warming. They show that more than 5000 at-sea observations of dissolved methane demonstrates that high shares of ESAS waters are supersaturated with methane. Shahkova et al. (2010B) found CH4 that probably originates from seabed CH4 reservoirs such as shallow hydrates and geological sources. This points to permafrost’s failure to further preserve CH4 deposits. The total amount of carbon preserved within the ESAS as organic matter and ready to release CH4 from seabed deposits is predicted to be ∼1400 Gt. Only a small fraction of this CH4, sealed with impermeable permafrost for thousands of years, would significantly alter the annual CH4 budget with global impacts. The shallowness of the ESAS allows the majority of CH4 to pass through the water column and escape to the atmosphere. Shahkova etal. (2007) found out that also under permafrost rivers transport methane. They show that the rivers are a strong source of dissolved methane, which comes from watersheds which are underlain with permafrost.

They point out also additional sources of methane such as submarine taliks, ice complex retreat, submarine permafrost itself, and decaying gas hydrates deposits. According to Ruppel & Kessler (2017), frozen gas hydrates sequester significant amount of carbon and are stable only over a range of low temperature and moderate-pressure conditions. However, according to their study, there is no conclusive proof that hydrate-derived methane is reaching the atmosphere now. There is evidence that once-frozen soil could be a major source of N2O, amounting to 60 % the CO2e of the methane emissions of studied area (Yanghe Yang et al. 2018).

Methane has a high GWP factor compared to CO2. However, in addition, it may have unexpected impacts in the atmosphere. Isaksen et al. (2011) apply a “state-of-the-art” atmospheric chemistry transport model to show that large emissions of CH4 would likely have an unexpectedly large impact on the chemical composition of the atmosphere and on radiative forcing (RF). The indirect contribution to RF of additional methane emission is particularly important. It is shown that if global methane emissions were to increase by factors of 2.5 and 5.2 above current emissions, the indirect contributions to RF would be about 250% and 400%, respectively, of the RF that can be attributed to directly emitted methane alone.

The following table presents methane emission variation from seven academic studies (Climate Science of Methane). The natural sources of methane seem to be currently relatively low as compared to anthropogenic ones.

The author suggests that future research should focus on providing quantitative data of global warming impacts on indirect emissions. This would enable inclusion of these impacts to LCA studies. The following formula could be used to calculate total impacts:

This process is, however, iterative, because indirect GWP impacts also lead to additional impacts. Some kind of cut-off criteria should be applied to be able to define these factors.

The authors would be happy to continue discussion on the issue and receive comments.

EPA 2016: Methane and Black Carbon Impacts on the Arctic: Communicating the science

Shakhova et al 2010A. Extensive Methane Venting to the Atmosphere from Sediments of the East Siberian Arctic Shelf.