Johnny Cash would have used compostable liner bags too – a composting story from Nashville, Tennessee 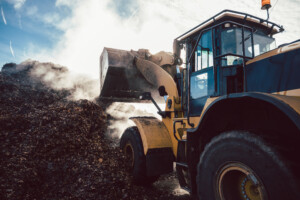 Earth mover working on pile of compost in industrial facility

Nashville, Tennessee, USA has not only been home of one of the world’s greatest singers, Mr. Johnny Cash, but also home of a pioneer of organic recycling in the area. In 2011, Edward Wansing launched The Compost Company (TCC) in Ashland City, Tennessee, the first organics recycler in the mid-state region around Nashville. Wansing, who grew up on a farm and pursued a career in sustainable architecture, saw a need for recycling of organic waste in the growing Nashville area. The facility, located on a 37-acre site, started out composting yard trimmings, wood chips and land clearing debris, and then began taking in pre-consumer produce waste.

After a couple years, Wansing began a hauling service, enabling TCC to expand into new areas in the region, as well as new food waste streams. Clients being serviced once collection was launched included the Music City Center convention facility, Nashville office buildings, food processors, and hotels and conference centers that host events producing large amounts of post-consumer food and paper packaging and serving waste, as well as compostable bioplastic service ware. The facility processes about 2,800 tons/year of food scraps along with 4,200 tons/year of yard trimmings and other carbon feedstocks.

Roughly 40% of the food waste received comes from generators that include compostable products, including liner bags (from back- and front-of-house) and foodservice ware from the front-of-house. “Our willingness to accept compostable products is the reason why some of our largest customers have signed up for collection service,” notes Wansing. Compostable products accepted by The Compost Company must meet ASTM D6400 and D6868 standards and be certified by the Biodegradable Products Institute (BPI). In addition to bioplastic and kraft paper liner bags, the full suite of compostable foodservice ware is accepted, including soiled paper; fiber bowls, plates, carryout containers and wooden-only utensils; and bioplastic cups, paper cups with bioplastic lining, utensils, plates, carryout containers and portion cups. The Compost Company can supply customers with liner bags, or they can procure their own.

“Liner bags make everything so much easier,” explains Wansing. Wansing and Clay Ezell, co-owner and Collection and Business Development Director of TCC, see a correlation between the increase in food scraps their company receives and the acceptance of compostable packaging. “It is an incentive to source separate their food scraps, especially when they want to include the front-of-house (FOH) stream,” says Wansing, “With food service establishments, we actually get more food scraps from the FOH versus the back-of-house (BOH), because kitchen staff are trying to waste as little food as possible. For us, post-consumer generates a lot more material, which is due in large part to the inclusion of compostable products. Our clients’ customers are more confident when they can throw everything into one bin, so they don’t have to determine what goes where.”