Juncker set out his vision of Europe – bioplastics pioneering innovation

When EU leaders gathered in Brussels at the beginning of March to discuss how to generate growth, create jobs and improve competitiveness in Europe, the President of the European Commission, Jean-Claude Juncker, set out his vision of Europe – a vision in which bioplastics are a concrete example of the pioneering innovations of the European industry.

In an opinion piece for POLITICO, Juncker emphasizes the importance of Europe’s industry and its biggest strength, which is “its ability to adapt and innovate”. The European Commission’s industrial strategy and investment plan – known as the ‘Juncker Plan’ – is supporting the transition to a modern, clean and fair economy, one in which bioplastics will play an important part: “Whether it is 3D printing, bio-based plastics for packaging or new systems to cut water use in the chemical industry, the EU will continue to fund and invest in pioneering innovation and European industry”, says Juncker. 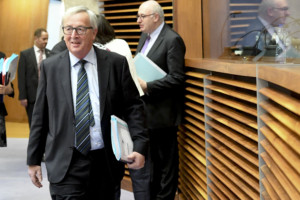 The EU has realised that, for Europe to stay competetive in a fast-moving, global environment, it must drive the paradigm shift from a linear to a circular economy and that linking it closely to the bioeconomy is necessary in order to ensure resources are used more efficiently. The European Commission has given priority to assessing how to reduce the plastics industry’s dependency on fossil resources in its recent Roadmap for a Strategy on Plastics. In March, the European Parliament plenary voted for amendments of the waste legislation that will encourage Member States to support the use of bio-based materials for the production of packaging and to improve market conditions for such products.

These developments present an important opportunity for the bioplastics industry across Europe, which has invested greatly in the development of innovative materials over the past decades. Replacing a significant proportion of the conventional fossil feedstock with plant-based or biowaste-based alternatives would not only contribute greatly to the reduction of greenhouse gas emissions but also increase resource efficiency. Both market push and pull measures could drive this transition, as would a level-playing-field regarding access to bio-based feedstock in the EU. Even though a lot still needs to be done, the initiated policy shifts and amendments are important opportunities for the bioplastics industry in Europe.