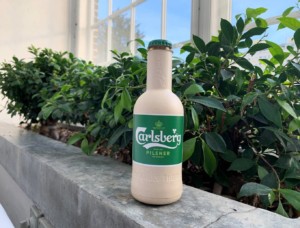 Last week, The Guardian reported on an interesting project, which has a great potential to revolutionize the beverage industry. The Dutch renewable chemicals company Avantium developed a bio-based plastic bottle made from PEF, which could substitute the conventional plastic bottles made from fossil resources. The bioplastic bottle is designed to fully degrade within a year in a composter and would require a few years longer under normal outdoor conditions if falsely littered into the environment. According to Avantium’s chief executive, Tom van Aken, ideally the bottle should be recycled.

Avantium is currently working on attracting investment capital. The brewing company Carlsberg already joined the group of supporting companies and expects to offer its liquid golden product in a cardboard bottle lined with an inner layer of bio-based PEF. Recently, Coca-Cola and the food company Danone also came on board. In a first project phase, Avantium plans to produce 5,000 tonnes of bio-based plastic annually, using sugar, maize, wheat or beets, so called first generation renewable feedstock. In the long term, the plant sugar should also be derived from second generation feedstock in form of bio waste.

With the bioplastic bottle, the beverage industry would make an important contribution to climate protection. Bioplastic production is at least climate-neutral, because, during their growth process, the processed plants remove as much CO2 from the atmosphere as they emit when decomposing. Furthermore, there is no land use challenge. The land used to grow the renewable feedstock to produce bioplastics amounted to approximately 0.79 million hectares in 2019. It accounts for less than 0.02 percent of the global agricultural area of 4.8 billion hectares, 97 percent of which were used for pasture, feed and food. Despite the market growth predicted in the next five years, the land use share for bioplastics will remain around 0.02 percent.

Avantium’s plan is to have the first bio-based bottles in stores by 2023. With the support of two major players of the beverage industry, Coca-Cola and Danone, the company came one step closer to its goal.