‘Rethinking Plastics’ – Insights into the bioplastic materials of the future 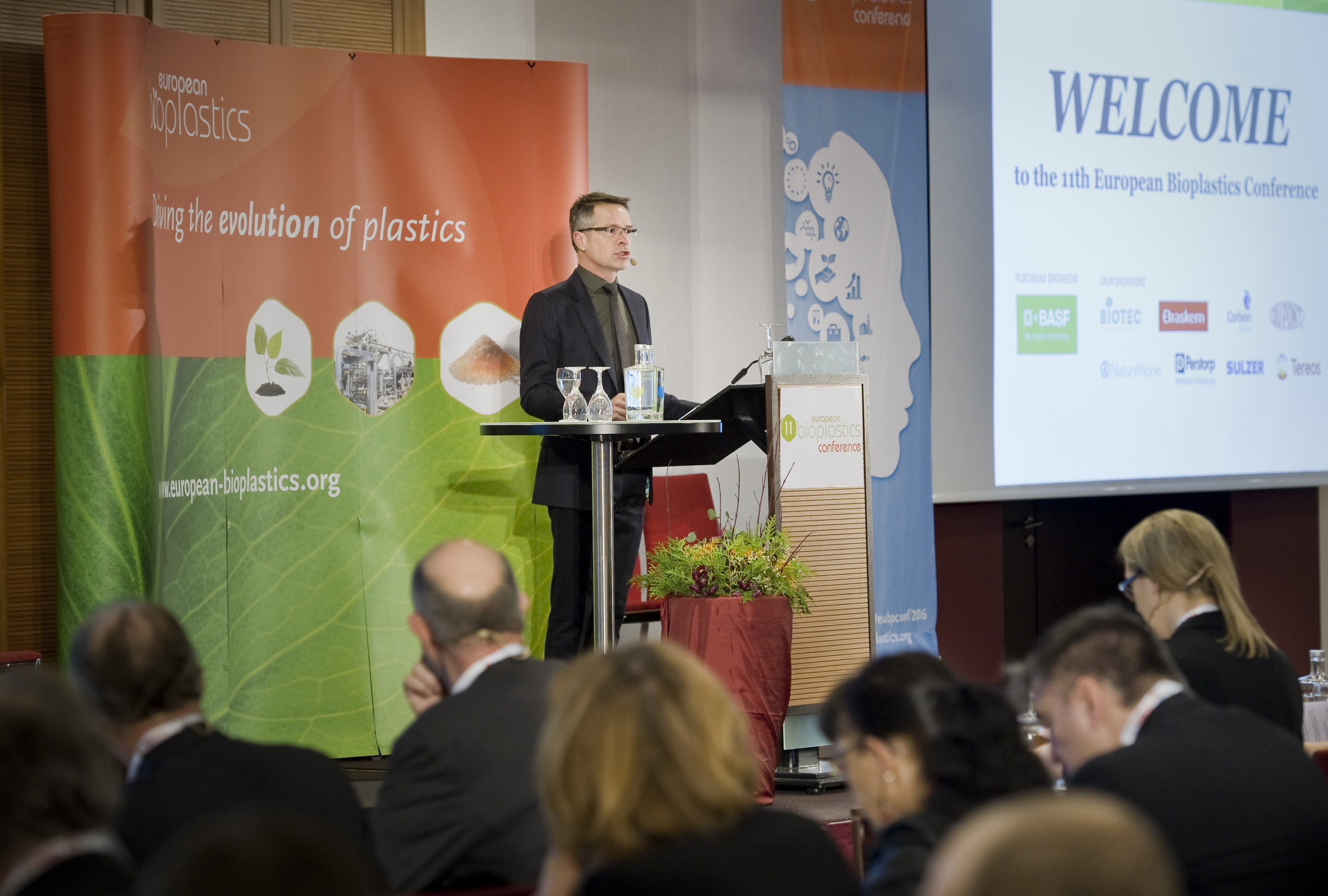 Berlin, 1 December 2016 – The 11th European Bioplastics Conference took place on 29/30 November 2016 in Berlin, attracting around 300 participants from industry, policy, research, and media. In his keynote speech, Hugo-Maria Schally, Head of Unit Sustainable Production, Products & Consumption, DG Environment at the European Commission, stressed the necessity for a coherent policy approach to support bio-based products in Europe: “The European Commission is committed to making the circular economy reality as it brings together environmental protection and social and economic gains. The EU Circular Economy Package aims to provide a supportive policy and legislative framework and incentives for innovative industries, such as bioplastics. The upcoming Plastics Strategy will also aim at addressing the challenge of high dependency on fossil feedstock.”

Opening the 11th edition of the annual European Bioplastics Conference, François de Bie, Chairman of European Bioplastics (EUBP), said: “Europe is a world leader in developing and commercialising renewable, bio-based products. This year’s conference is yet again witness to the many technological innovations and the outstanding progress of the bioplastics industry in ‘rethinking plastics’ in a sustainable, circular, and resource efficient way. We welcome the commitment of EU legislators to move away from the linear economic model towards a circular economy that uses resources more efficiently and that links to a stronger bioeconomy. Their support is a crucial signal to our industry and investors in the bioeconomy at a time of continued low oil prices and subsidies of the fossil fuel industry.”

A highly anticipated session was the presentation of the 2016 annual market data update delivered by Kristy-Barbara Lange, Deputy Managing Director of EUBP, on the second day of the conference: “The positive trend of the past ten years continues. According to our latest market data, the global bioplastics production capacity is predicted to grow by 50 percent in the next five years,” said Lange. This development was confirmed in several presentations by large brands, such as Renault, Henkel, Tetra Pak, and Kimberly-Clark, outlining their commitments and initiatives to reduce their environmental footprint and the role of bioplastics in achieving these ambitious goals. The Netherlands Standardization Institute NEN launched their new certification scheme for bio-based products based on the European standard EN 16785-1, and the first two certificates were issued to Corbion, a leading producer of high performance PLA, and Kraton, a leading biorefiner of pine chemicals, during the conference.

Rodenburg, Taghleef, and Mars were awarded the 11th Annual Bioplastics Award, hosted by bioplastics MAGAZINE during a special ceremony, for the development of bio-based wrappers for the Snickers chocolate bars. The innovative material for the wrapper is made from starch derived from potato cutting waste and PLA. The project is the result of the collaboration between three companies, including Dutch bioplastics producer Rodenburg, who developed the material, Taghleef, who manufactured the film, and Mondi, who printed the packaging.

The 11th European Bioplastics Conference 2016 attracted around 300 participants from 150 companies and 29 countries to connect and catch up on the latest developments, issues, debates, and trends in the bioplastics industry in Europe. 22 companies showcased a great diversity of the latest products, materials, and applications at the exhibition alongside the conference.

European Bioplastics extends a special thank you to the sponsors of this year’s conference: BASF, Braskem, Corbion, DuPont, NatureWorks, Perstorp, Tereos, BIOTEC, and Sulzer, for their support to make the 11th edition of the European Bioplastics Conference another successful meeting of our industry.

More information on the market data update is also available in the recent press release.

For more information about the Bioplastics Award, the winner, and finalists, please go to bioplastics MAGAZINE.