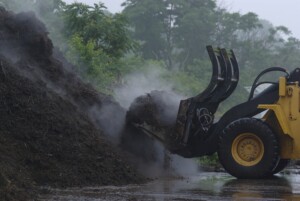 A recently conducted study which focused on the identification and quantification of microplastics in final refined compost found no remains of used EN 13432 certified industrial compostable bioplastics. If correctly composted, their use does not contribute to the increase of microplastic pollution.

Microplastics and their potential environmental and health impacts have been of growing concern in recent years. Compost produced from separately collected biowaste, which is increasingly contaminated with conventional plastics, has become a contributor to microplastic pollution as plastic remains can leak into the environment.

Spanish researchers from the University of Alcala and the Universidad Autonoma de Madrid selected and studied the final refined compost of five industrial composting facilities on the peninsula over a five-month period. This also included four materials made from compostable bioplastics certified according to the European Standard EN 13432. The researchers selected two commercial bags from local markets, one wrapping film from a commercial food package, and specimens from the material Mater-Bi supplied by Novamont S.p.A.

The debate about the biodegradability of compostable plastics still too often lacks science-based arguments and is distorted by false claims without any scientific proof. Hence, the study is very much welcomed as it further improves the data availableon the performance of compostable plastics. It contributes to the knowledge base of serval other studies that have been published in the past, e.g., by Wageningen University & Research, Witzenhausen Institute, and the University of Bayreuth.