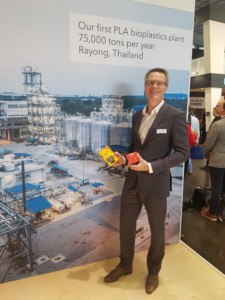 In September 2019, Total Corbion PLA, a 50/50 joint venture between Total and Corbion, officially inaugurated its 75,000 tons per year PLA (Poly Lactic Acid) bioplastics plant in Rayong, Thailand. The new facility produces a broad range of Luminy® PLA resins from renewable, non-GMO sugarcane sourced locally in Thailand. The plant has already been operational since October 2018. According to company sources, last year’s production already reached a volume of over 20,000 tons of PLA. In 2019, the plant’s production has further increased. Currently, one third of the production capacities are used. For 2020, Total Corbion expects that two third of the facility’s production capacities will be exploited. To François de Bie, Senior Marketing Director at Total Corbion PLA, the very rapid increase in the demand for PLA is above expectations. “The development is driven by great concerns over traditional plastics, and companies are looking for sustainable alternatives“, explains de Bie.

In addition, a recent Total Corbion peer reviewed Life Cycle Impact Assessment of PLA produced from sugarcane in Thailand confirmed the bioplastic’s low carbon footprint. Besides the carbon footprint, the study also covers topics, such as water footprint and land use, but also the potential to further reduce the environmental impact of PLA. Against this background, there is no doubt that Total Corbion’s investment in Thailand was only the first step of a comprehensive expansion of PLA production capacities.