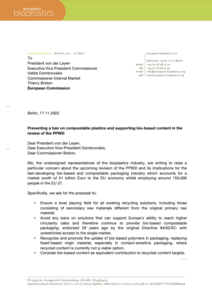 The recently published leak of the Packaging and Packaging Waste Directive (PPWD) revision proposal sent a shock wave to the affected industries within Europe and beyond. The bioplastics industry finds itself confronted with a factual ban on most compostable plastics packaging. The ban has the potential to shut down wide sections of the industry concerned in Europe. The draft Proposal also shows the European Commission’s strong reluctance to support the uptake of bio-based polymers to substitute fossil-based virgin material.

We, the undersigned representatives of the bioplastics industry, are writing to raise a particular concern about the upcoming revision of the PPWD and its implications for the fast-developing bio-based and compostable packaging industry which accounts for a market worth of 51 billion Euro to the EU economy whilst employing around 150,000 people in the EU 27.

Specifically, we ask for the proposal to:

We, along with multiple businesses and governments across the world, have united behind a vision with concrete 2025 targets for a circular economy for packaging. We are fully aligned with the European Green Deal objectives to reach carbon neutrality by 2050 and are committed to reaching “100% reusable, recyclable and compostable plastic packaging” by that date. To reach these objectives, it is key for policymakers to provide an enabling regulatory and policy landscape.

Addressing the plastic waste challenge and meeting ambitious targets requires from us to be able to select and choose between well-established packaging materials and the best novel technologies. Thus, we need to both further expand and enhance existing recycling technologies as well as test, study, and embrace promising new packaging materials/solutions. A wide scope ban on compostable plastic packaging would immediately close the door on such a technology, which was originally opened by the European Union creating new European industries and even an Extended Producer Responsibility consortium in Italy.

A ban of compostable packaging as well as the reluctance to support the uptake of bio-based polymers to substitute fossil-based virgin material, which will always be needed no matter how much the recycling processes may advance, would freeze any further research and investments into this new space, also potentially in applications other than packaging, and would in effect shut down this industry in Europe. Four of the largest producers of bioplastics – plastics which are bio-based, biodegradable, or both – in the EU (BASF, TotalEnergies Corbion, Novamont and Biotech/Sphere) have so far collectively invested 1.6 billion Euro in plant construction and joint ventures, as well as a further research and development. Furthermore, more than 100 million euros of the 1-billion-euro Biobased Industry Joint Undertaking fund were spent for research and development in this field. This is demonstrative of our industry’s commitment to the EU’s bioeconomy and acting as a credible partner to achieve this needed shift.

600,000 tonnes of compostable and bio-based plastics were produced in the EU in 2021, this figure is estimated to reach 1.3 million tonnes by 2026. The result of a potential ban on compostable plastics and the de facto adherence to fossil-based plastics may not only compromise our ability to reach our own targets and those set by the policymakers but would also jeopardise the European Union’s current leadership role in the sector, as displayed by the case studies mentioned previously. In consequence, this would shift important innovations to other parts of the world such as China, India, Australia and the United States, where compostable packaging currently receives positive incentives and a favourable regulatory landscape.

We therefore call upon the European Commission to respect its original political direction, the principle of proportionality and to ensure a level playing field for all circular technologies. It is important not to close the door on a promising and innovative sector in Europe, which we see as one of the options at our disposal to move towards a zero-waste future. We would be happy to discuss this in greater detail and provide you with more information should it be needed.