On 25 January 2017, at the crossroads of several important dossiers and initiatives concerning the Circular Economy Package, Margrete Auken, Member of European Parliament, hosted a breakfast debate on ‘Clarifying biodegradable plastics and how to put them to proper use’.

MEP Auken welcomed a delegation of the Congress’ of the Philippines Ecology Committee – Mr Dilbert Quetulio and Mrs Glenda Daco – to participate in the breakfast debate. 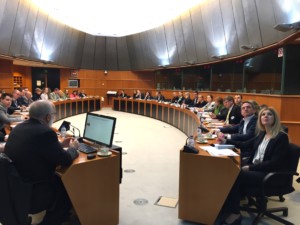 The three speakers Philippe Dewolfs, (Vinçotte), Professor Emmanuelle Gastaldi (University of Montpellier), and Stefano Facco (Novamont) shared their knowledge on standards and labels for biodegradable plastics, on research of positive agronomical effects and biodegradation of mulch films in soil, as well as how biodegradable plastics can support bio-waste collection and food waste prevention.

Some of the main insights for the 40 participants representing the EU institutions as well as science, environmental NGOs and industry, were:

European Bioplastics thanks MEP Margrete Auken for hosting this event and facilitating the exchange of knowledge on biodegradable plastics.

You will find more information at the EUBP website: