Berlin, 1 December 2021 – European Bioplastics presented today at the 16th EUBP Conference a very positive outlook for the global bioplastics industry. Production is set to more than triple over the next five years according to market data which was compiled in cooperation with the nova-Institute (Hürth, Germany).

“The importance of a more than 200 percent growth rate within the next five years cannot be overstated. Before 2026, the share of bioplastics in the total global production of plastics will pass the two percent mark for the first time. Our formular of success is a strong belief in the abilities of our industry, the aspiration for continuous innovation, and the courage to make the necessary financial investments”, explains François de Bie, Chairman of European Bioplastics.

The global bioplastics production capacity is set to increase significantly from around 2.4 million tonnes in 2021 to 7.5 million tonnes in 2026. Biodegradable PBAT (polybutylene adipate terephthalate), the production of which will almost quadruple, but also PBS (polybutylene succinate) and bio-based PAs (polyamides) are the main drivers of this impressive growth. The production of polylactic acid (PLA) will also continue to grow due to further investments in PLA production sites in Asia, the US, and in Europe. Production capacities of bio-based polyolefins, such as PE (polyethylene) and PP (polypropylene), increased as well.

Packaging remains the largest field of application for bioplastics with almost 48 percent (1.2 million tonnes) of the total bioplastics market in 2021. The data also confirms that bioplastics materials are already being used in many other sectors, and the portfolio of application continues to diversify. Segments, such as consumer goods, fibre or agriculture and horticulture products, continue to increase moderately in their relative share.

With a view to regional capacity development, Asia further strengthened its position as major production hub with almost 50 percent of bioplastics currently being produced in the region. Presently, almost a fourth of the production capacity is still located in Europe. However, Europe’s share and the share of other world regions will significantly decrease within the next five years. In contrast, Asia is predicted to have passed the 70 percent by 2026. “We will see an impressive increase in bioplastics production over the next years. This also requires the expansion of production facilities. This way, our industry will be able to respond to the growing demand for bioplastics. As last year, also this year we have seen the announcement of additional production sites”, says Hasso von Pogrell, Managing Director of European Bioplastics.

The land used to grow the renewable feedstock for the production of bioplastics is estimated to be 0.7 million hectares in 2021 and continues to account for only just over 0.01 percent of the global agricultural area of 5 billion hectares. Along the estimated growth of global bioplastics production in the next five years, the land use share for bioplastics will increase to still below 0.06 percent. “In relation to the available agricultural area, this share is still minimal. Thus, there is no competition between the renewable feedstock for food and feed and the production of bioplastics” says von Pogrell, “Over 90 percent of the global agricultural area is used for pasture, feed and food.” 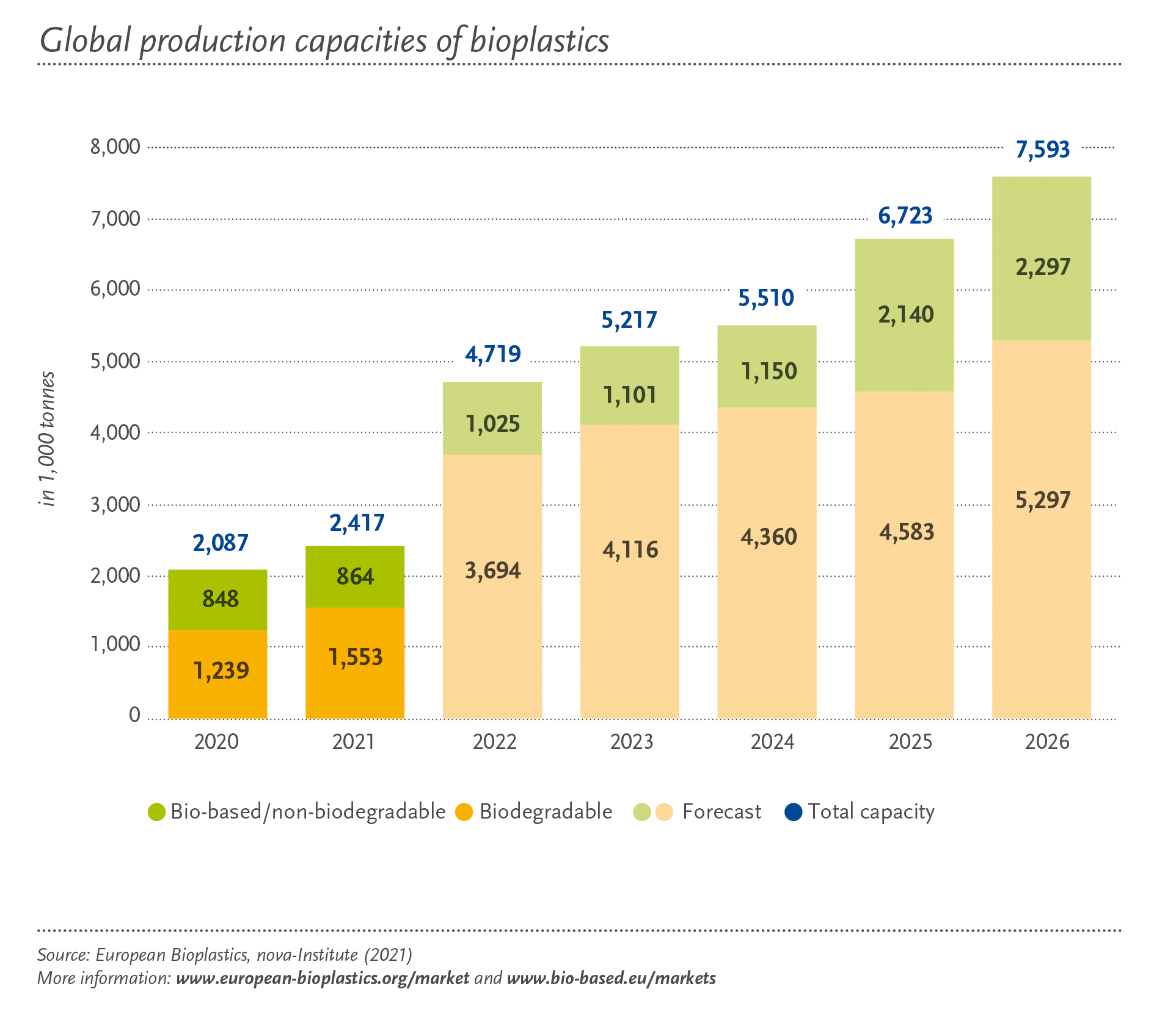