The role of compostable plastics within the circular economy 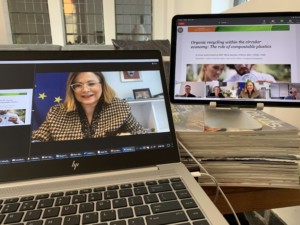 On 3 March 2021, the EUBP webinar “Organic recycling within the circular economy: the role of compostable plastics” explored the contribution of biodegradable and compostable plastics to help the EU to meet its organic waste recovery targets by the end of 2023. In order to establish a truly circular economy, the EU needs to capture this untapped potential by collecting and organically recycling this waste into high value compost for soil enrichment.

In her welcome statement, our host MEP Maria Spyraki gave a comprehensive overview of the political environment for bioplastics. She outlined the environmental challenges and identified compostable plastics as an important part of the solution. According to Ms Spyraki, “compostable plastics are an attractive answer and a credible part of the solution to the circular economy transition problems.” However, still, several barriers must be overcome to enable the extensive use of these materials. MEP Spyraki called for a common bioplastics definition, the complete implementation of existing EU legislation, and underlined the importance of ensuring a stable market for bioplastics as well as the need for further investment into research.

Ms Spyraki’s presentation was complemented by an overview given by François de Bie, Chairman of EUBP. He showed how bioplastics fit into the EU’s political agenda outlined in the European Green Deal and the new Circular Economy Action Plan: the need for climate neutral material, the improvement of organic waste recovery, and the need to drive innovation to achieve a circular bioeconomy. “Bioplastics as a driver for innovation will help to create growth and allow Europe to remain competitive with other big industrial nations”, said the Chairman of EUBP. Focussing on the role of biodegradable and compostable plastics within the circular economy, de Bie emphasised two outstanding aspects: on the one hand, the materials help to collect more biowaste and, thus, divert it from the landfills and incineration. On the other hand, they help preventing traditional plastic from ending up in composting.

Joan Marc Simon from Zero Waste Europe added to the discussion presenting key findings from the ZeroWasteEurope/Bio-based Industry Consortium study on the potential for organic waste recovery in the EU. He explained the structural problems behind the low capture rates of food waste and biowaste in Europe and made clear why all waste fractions would benefit from higher capture rates. Regarding food waste, Mr Simon concluded: “Most European countries are below a 10% capture rate, so there is still a long way to go for most countries”. He highlighted positive examples such as the food waste collection in the Italian City of Milan where compostable plastics enable a successful waste management. Mr Simon is indicated a role for compostable bags, coffee capsules, and tea bags in increasing the capture rates of food scraps. However, their use should be connected to composting schemes.

The second, more technical part of the webinar was initiated by Bruno De Wilde from OWS who g gave a presentation on the fundamentals of composting. In order to address existing misunderstandings and false rumours about the compostability of bioplastics, he went back to the basics and explained the elements of compostability as well as the basics of organic waste management, also differentiating industrial from home composting. Like previous speakers he emphasised compostable plastics’ role in increasing the capture rate of biowaste: “By using compostable materials, you have a strong added value”, he concluded.

Karin Molenveld from Wageningen University & Research then focused on the actual industrial composting process. She addressed the common question whether or not compostable plastics would disintegrate fast enough. Therefore, she presented key findings of a recent study which analysed the fate of compostable products in a full-scale industrial organic waste treatment facility. The study showed that different tested certified compostable products broke down within a maximum of 22 days.

“It’s really important to get the economics right”, said David Newman from the Bio-based and Biodegradable Industries Association, as he focussed on the challenges and related costs for organic waste management caused by conventional plastics. Even the best–case example of organic waste management, Italy, would spend around 100 million Euros per year to clean its biowaste from conventional plastics. Mr Newman expects the costs for the whole EU to sum up to a minimum of a billion Euros. “We are actually ignoring one of the largest single unnoticed disposals of plastic waste into the biowaste treatment cycle in the EU”, he noted. According to Newman, a key measure to be taken by the EU to stop plastics from going to soil and destroying food waste treatment plants should be to mandate the use of compostable bags for biowaste collection. At the same time, the conventional counterparts should be completely banned.

During the webinar, it became clear that significant work is needed to achieve the EU’s organic waste recovery targets by the end of 2023. However, there was a broad consensus amongst the speakers that this would be essential in establishing a truly circular economy and that compostable plastics could play a significant role in this process. European Bioplastics intends to maintain an ongoing dialogue with stakeholders on this important area and we are looking forward to further building on these discussions in the future.