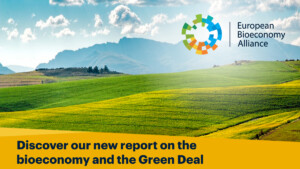 The big picture, as formulated in the European Green Deal, is quite clear: Europe needs to become a more sustainable, resilient, and competitive economy. The bioeconomy has a huge potential to contribute to the Green Deal transition as it encompasses all sectors involving the use of renewable resources, without comprising biodiversity goals. It is by making the shift to bio-based products and processes that Europe will strengthen its resilience and reduce its dependency on fossil and non-renewable resources. At the same time, this system change will help to reduce CO2 emissions. The importance of the bioeconomy is already recognized in the European Union’s policies, especially the EU Bioeconomy Strategy and its Progress Report.

In this regard, the European Bioeconomy Alliance (EUBA) just recently published a comprehensive overview on how the bioeconomy contributes to the achievement of the European Green Deal. The overview is accompanied by a selection of best practice cases to further illustrate the importance of the bioeconomy’s role. EUBA, of which European Bioplastics is an active member, is a unique cross-sector alliance committed to helping lead the transition from a fossil-based society to a more sustainable and circular bio-based industry.

Due to its versatility, the bioeconomy can contribute to very different parts of the economy. Food and nutrition security ranks amongst the EU’s key strategic objectives, and investments in a strong bioeconomy offer sufficient high-quality and sustainably produced aquantities of food. Furthermore, land-use and security of supply are optimized through a resource-efficient utilization of Europe’s renewable raw materials. This also applies to the production of bioplastics, where the land used for growing feedstocks for bio-based products is marginal. Even worldwide, only 0.02 percent of the global agricultural area is used for their production.

In the bioeconomy, renewable biological resources can be used in many ways. Amongst other things, in the bioplastics industry, new innovative processes are currently being developed using both first- and second-generation feedstock, i.e., from side-streams of the agri-industry, offering the potential for bioplastics to provide the agri-industry with a high value outlet for part of their side-streams and transforming waste into valuable resource.

Waste reduction is another important area where Europe’s bioeconomy can make significant contributions. For example, bioplastics broaden possibilities in waste management and contribute to creating circular production systems. Compostable bioplastics are a solution to increase the quantity and quality of organic waste collected, allowing its diversion from landfill and the production of high-quality compost to be used as soil amendment and as a carbon sink.

The bioeconomy also plays an important role in de-fossilising the economy, as using renewable materials is advantageous for several reasons: they have a low carbon footprint, they are regenerative by nature; they capture and sequester CO2. Switching to using biological resources, and processing methods in a sustainable way could save up to 2.5 billion tonnes of CO2-equivalent per year in the EU by 2030.

There are also a number of bioeconomy-related research projects funded by the EU PPP Circular Bio-based Europe Joint Undertaking that contribute to climate mitigation. Considering EU Flagships between 2014 and 2021, the total CO2 savings are expected to surpass 800kt CO2 per year. E.g., in the field of bio-based coating materials, life-cycle analyses show that, compared to conventional plastics, bio-based plastics generate significant CO2 savings, up to carbon neutrality. Substituting the annual European demand for fossil-based polyethylene (PE) with bio-based PE would save around 73 million tonnes of CO2.

The European bioeconomy is also an important motor for creating green jobs. In the EU, more than 17 million jobs are linked to the bioeconomy, generating a global turnover exceeding 2.4 trillion euros. These values represent 4.7 percent of the EU’s gross domestic product and 8.3 percent of its labour force. The EU biotechnology industry generates over 900,000 jobs – 223,000 directly, 710,500 indirectly. For every direct job in the industry, there are more than three jobs created with the overall economy. The 2.6 percent growth rate in employment achieved by the biotechnology industry is far above the overall rate of 0.2 percent and demonstrates the role the sector plays in stimulating the EU labour market.

To unleash the full potential of Europe’s bioeconomy and, thus, completely benefit from its contribution to the European Green Deal, EU policy makers need to further improve the bioeconomy’s regulatory framework. EU politics still needs to strengthen its support for the bio-based industry including bioplastics. Because the European Union’s ambitious economy-related goals can only be reached if all industry sectors are able to provide their full support.