These were the highlights that shaped bioplastics in 2016

2016 has been another eventful, promising, and successful year for bioplastics. While the discussions around the EU Circular Economy Package and first regulatory changes in the Members States reshape the legislative and economic landscape for businesses involved in the bioeconomy in Europe, the bioplastics industry continues to drive innovation in new bioplastics solutions and the development of bio-based materials for a more circular and sustainable future. A future in which, according to our recent market forecast, global production capacities of bioplastics will grow by 50 percent between 2016 and 2021 from 4.2 million tonnes to 6.1 million tonnes.

With the year drawing to a close, we want to revisit some of the highlights and innovations of 2016 that shaped the bioplastics industry (in no particular rank order): 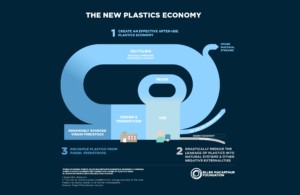 At the beginning of 2016, the Ellen MacArthur Foundation published their report ‘New Plastics Economy: Rethinking the Future of Plastics’ at the World Economic Forum in Davos, which attracted the attention of many opinion and industry leaders around the globe. The report arguably provides the first comprehensive, overarching vision of a global circular plastics economy in which bioplastics play an essential role in decoupling the economy from fossil resources and help to return nutrients to the soil. The report demonstrates very clearly how bioplastics can help to deliver better economic and environmental outcomes by replacing fossil with bio-based feedstock, while developing the many benefits of plastic packaging. The report acknowledges that ‘feedstock from renewable sources helps decouple plastics production from finite fossil feedstocks and reduce the greenhouse gas footprint of plastic packaging

[…] and potentially act as a carbon sink throughout their life cycle’.

Building on the recommendations of the report, the Ellen MacArthur Foundation launched the ‘New Plastics Economy’ initiative, bringing together 40 leading companies and cities to take on the challenge of the transformation towards a global plastics system that applies the principles of the circular economy.

As part of the new law on Energy Transition and Green Growth, and in line with the EU Directive on the reduction of plastic bags, France banned single-use plastic bags at cash registers in France as of July 2016 except for bags that are bio-based and home-compostable. From 1 January 2017 on, single-use plastic bags for other uses than at the cash register, including fruit and vegetable bags, that are below a thickness of 50 microns, will have be home-compostable and feature a bio-based content of at least 30 percent as well. In September 2016, France went yet another step further and banned disposable plastic plates, cups, and utensils by 2020, except for ones made from bio-based and home-compostable plastics.

Even though the bioplastics industry did not actively promote or ask for a ban, European Bioplastics supports measures that promote bio-based and biodegradable materials and products. These decisions present an important opportunity for the French and European bioplastics industry, which has invested greatly in the development of innovative materials over the past decades, and appropriate bio-based and biodegradable materials for products such disposable tableware are readily available on the market.

PHA is the ‘new kid on the block’

PHA (polyhydroxalkanoates) is a new polymer family that has been in development for a while and has now finally entered the market at commercial scale. As more and more players (currently around 30 companies) are getting involved in the production of PHA products, the prices for PHA dropped, and sales volumes went up. According to our latest market data update, PHA production will almost quadruple by 2021 compared to 2016, due to a ramp-up of capacities in Asia and the USA and the start-up of the first PHA plant in Europe.

PHA polyesters are 100 percent bio-based and produced through a natural bacterial fermentation process where specific bacteria are fed natural food sources such as sugars and produce PHA granules as an energy reserve. PHA polymers feature a wide array of physical and mechanical properties, including improved barrier properties suitable for food packaging. PHA is biodegradable and compostable in industrial composting plants but also in other environments such as marine waters.

The materials available for 3D printing have come a long way since the early days of the technology. With 3D printers becoming more accessible and affordable, the demand for suitable printing materials is increasing, too. And already, numerous filaments are available on the market. Next to ABS, bio-based materials such as PLA are the most popular choices of material. PLA filaments have fast become the material of choice for particularly desktop 3D printer users due to the material’s excellent processability, aesthetics, colourability, sweet smell while printing, low toxicity, and its bio-based origin.

Bio-based plastic producer Braskem and U.S.-based Made In Space, the leading developer of zero gravity 3D printers and an official supplier to NASA, developed a bio-based polyethylene (PE) solution especially for 3D printing in zero gravity. The partnership will enable astronauts to receive digital designs of parts or tools they need by e-mail and then print them.

CO2 and methane as feedstock for bioplastics

The use of greenhouse gases, such as carbon dioxide and methane, as feedstock for the production of bioplastics has gained a lot of momentum in 2016. The first commercial production plant for CO2-based polymers has been opened by Covestro in Dormagen, Germany in June 2016. The plant uses carbon from CO2 to manufacture a new type of polyol, which are core building blocks for polyurethane foam – a versatile material that is used in many industries around the world and that we encounter throughout our daily lives. The company has invested some 15 million euros in the new plant, which has an annual production capacity of 5,000 metric tons. The CO2 used is a waste product from a neighboring chemical company.

Other technologies have also advanced enough to allow for production on an industrial scale in the mid-term. Earlier this year, NatureWorks has opened a new laboratory worth 1 million US Dollars at the company’s headquarters in Minnesota, USA, to commercialise the fermentation process for transforming methane into lactic acid, the building block of Ingeo PLA. The fermentation of lactic acid from methane using the new biocatalyst will structurally lower feedstock costs, which in turn will make these solutions more competitive and help to vastly expand the portfolio of products and applications.

PEF is the new star on the horizon

PEF (polyethylene furanoate) is a new polymer that is expected to enter the market in 2020. PEF is a next-generation polyester that is comparable to PET but that also features 100 percent bio-based content, superior barrier and thermal properties, making it ideal material for the packaging of soft drinks, water, alcoholic beverages, fruit juices, food and non-food products. Currently, PEF is still at the development stage, but with more players getting involved, the future for this new material is looking very optimistic. One of the major players, Avantium, is working in collaboration with a number of partners to develop and commercialise PEF based on their YXY-technology for the production of FDCA, the main building block for PEF. Together with BASF, Avantium established the joint venture Synvina in 2016, which will invest a medium three-digit million euro sum to build a reference FDCA production plant with an annual capacitiy of up to 50,000 metric tonnes.

Standardization efforts around bio-based materials have been complemented by a number of very important standards and norms over the past year. The Working Group 3 of the Technical Committee 411 of CEN, the European Committee for Standardization, has developed several different standards for the measurement of the renewable content of biobased materials and bioplastics, including the norm EN 16640 for the determination of the bio-based carbon content using the radiocarbon method (C14). Other standards are currently being finalised and will be published in the next year. Clear standards are an important tool for young industries like the bioplastics industry that help introduce benchmarks for desirable quality requirements, to prevent fraudulent market behaviour, and to ease competition and commercial growth by overcoming barriers that result from unclear or inconsistent claims. More information on all relevant standards and labels for bio-based and biodegradable plastics can be found in our fact sheet.

‘Rethinking Plastics’ – Insights into the bioplastic materials of the future

The year ended with another well received and very successful European Bioplastics Conference, the leading business and networking event for the global bioplastics industry. The 11th edition, which took place on 29/30 November 2016 in Berlin, was yet again witness to the many technological innovations and the outstanding progress of the bioplastics industry in ‘rethinking plastics‘ in a sustainable, circular, and resource efficient way. The conference attracted around 300 participants from 150 companies and 29 countries to connect and catch up on the latest developments, issues, debates, and trends in the bioplastics industry in Europe. 22 companies showcased a great diversity of the latest products, materials, and applications at the exhibition alongside the conference. You can read more about the event here and make sure to save the date for the 12th edition of the European Bioplastics Conference on 28/29 November 2017 in Berlin.