Biodegradable mulch films have been available on the market for more than 15 years, backed by solid scientific and technical knowledge, and meeting a high level of acceptance among European farmers growing fruits and vegetables. They play an essential role in modern agriculture as they deliver positive agronomical effects such as increasing yield, improving quality of crops, weed control, and reduction of water irrigation and pesticides. Additionally, they offer distinctive advantages at the end of the crop cycle as they can be left on the field and ploughed under, which significantly reduces the agricultural plastic waste and potential soil pollution.

Organic Waste Systems (OWS), an independent research laboratory based in Belgium and specialised in the field of biodegradability and compostability, published an expert statement on biodegradable mulch films, which takes a closer look at the biochemical pathway of biodegradation and the accumulation of plastics in the soil.

Accumulation of plastics in soil

Traditionally, mulching films are produced from fossil-based polymers, such as polyethylene (PE). It is estimated that as much as 68 percent of the mulching film remains on the field since the removal is time consuming and the disposal expensive. This leads to large amounts of non-biodegradable mulch film buried in the soil and accumulating over time.

Biodegradable mulch films can be ploughed into the soil at the end of the growing season without causing any long-term plastic accumulation. A typical biodegradable mulching film will biodegrade completely within a maximum of two years.

The complete expert statement can be downloaded here. 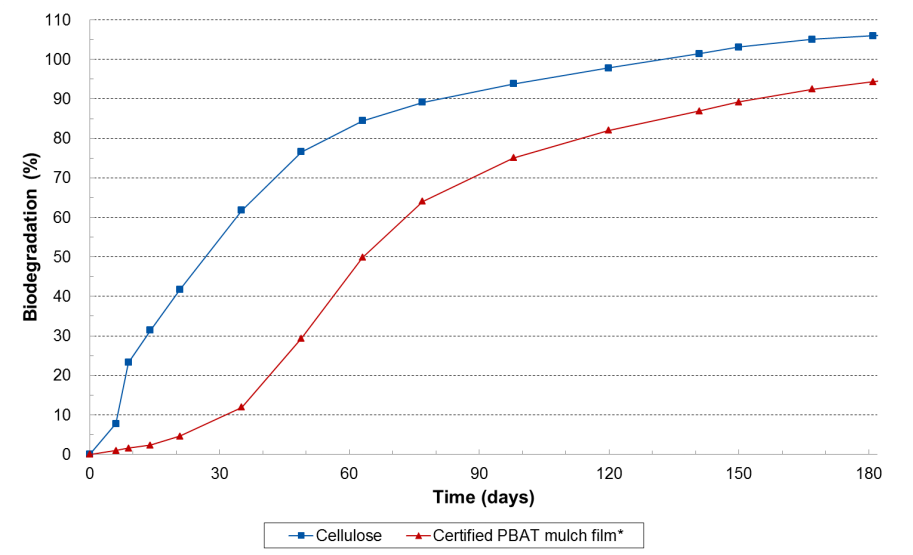 Biodegradation in soil of a certified PBAT mulch film (certified as biodegradable in soil). Source: OWS