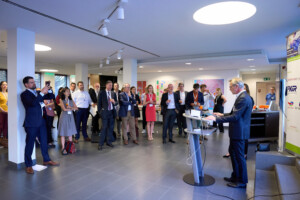 On 22 June 2022, for the first time after the Covid-19 outbreak, European Bioplastics (EUBP) invited political stakeholders to a networking event in Brussels. François de Bie, Chairman of EUBP, welcomed the over 70 guests in the premises of the Representation of the State of North Rhine-Westphalia to the European Union. De Bie expressed his appreciation for the great number of different stakeholders attending the EUBP event, including representatives from the EU Commission, the European Parliament, science, and the industry.

In his welcome remarks he looked back at almost ten years as Chairman of EUBP and briefly outlined the association’s development during that time. The great interest in this event would also reflect the essential role that bio-based, biodegradable and compostable plastics play in Europe’s transition towards a renewable, circular economy. In this regard, de Bie gave an outlook on the economic development of the bioplastics industry whose production capacities are expected to more than triple during within the next five years. By 2026, the share of bioplastics in the overall plastics production is expected to pass the two percent mark for the first time. However, he also made clear that a continued successful development of the industry would require a clear and reliable political environment. Therefore, the EUBP Chairman welcomed the European Commission’s policy initiatives contributing to the establishment of such a political environment, especially the forthcoming policy framework on bio-based, biodegradable and compostable plastics. However, the policy framework, as well as the other EU policy initiatives, should acknowledge the important role of bioplastics within a circular economy in a much stronger way than EU policies did in the past. In this regard, de Bie especially emphasized the need for a level playing field of fossil-based and bio-based plastics.

His asks were directly received by the keynote speaker of the evening, Ms. Emmanuelle Maire, Head of Unit, Circular Economy, Sustainable Production & Consumption at DG ENV, who gave an update on the current status of development of the policy framework for bioplastics. Maire confirmed that bio-based, biodegradable and compostable plastics can help in the transition to a climate-neutral, biodiversity-friendly, zero pollution, and circular economy. However, she also pointed out that bioplastics can also present several challenges. In this regard, the policy framework would be important as it would help to share and prove the understanding of these materials and to clarify the conditions under which they can deliver genuine environmental benefits.

In her keynote she described the Commission’s approach to develop the framework, which started with establishing a data, respectively, knowledge base on bioplastics. To that objective, the Commission had awarded several studies, the findings of which she introduced to the audience. With regards to the benefits of bio-based plastics, Maire underlined the potential to partially decouple the chemical industry from fossil resources. In this regard, she mentioned the issue of land use as a possible challenge. When touching upon compostable plastics, she emphasized their potential to reduce plastics contamination in different environments, to reduce food waste, and to facilitate the diversion of biowaste from residual waste to avoid incineration. A potential challenge could arise when conventional and compostable plastics are used together, which could lead to the risk of incorrect waste management. Especially in this case, adequate and sufficient information to the consumer would be key. Maire also focussed on biodegradable plastics in the open environment, especially in the agricultural sector. In this regard, she confirmed that biodegradable plastics can help reduce the persistence of plastic in the environment but also noted that the term “biodegradable” would pose a challenge, as it can be ambiguous. Therefore, the Commission would strive for a ban of the term where the conditions under which a specific material biodegrades are not provided. Closing her keynote, Maire gave a rough overview on the priorities the Commission would like to touch upon with the policy framework, starting with the principle of reducing, reusing, and recycling. Amongst other things, a focus would also remain on the topic of single-use plastic products, the avoidance of general claims, and a minimum bio-based content for bio-based plastics to be labeled as bio-based.

During the subsequent reception with drinks and finger food, the attending guests also had the chance to seek for bilateral talks with representatives from different DGs, including Emmanuelle Maire, to further elaborate on single aspects of the current political debate on bioplastics.