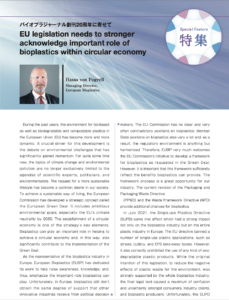 Read below a guest article by Hasso von Pogrell, Managing Director of European Bioplastics which was recently published in the anniversary edition of the Japanese BioPlastics Association journal.

During the past years, the environment for bio-based as well as biodegradable and compostable plastics in the European Union (EU) has become more and more dynamic. A crucial driver for this development is the debate on environmental challenges that has significantly gained momentum. For quite some time now, the topics of climate change and environmental pollution are no longer exclusively limited to the agendas of scientific experts, politicians, and environmentalists. The request for a more sustainable lifestyle has become a common desire in our society. To achieve a sustainable way of living, the European Commission has developed a strategic concept called the European Green Deal. It includes ambitious environmental goals, especially the EU’s climate neutrality by 2050. The establishment of a circular economy is one of the strategy’s key elements. Bioplastics can play an important role in helping to achieve a circular economy and, in this way, also significantly contribute to the implementation of the Green Deal.

As the representative of the bioplastics industry in Europe, European Bioplastics (EUBP) has dedicated its work to help raise awareness, knowledge, and, thus, emphasize the important role bioplastics can play. Unfortunately, in Europe, bioplastics still don’t obtain the same degree of support that other innovative industries receive from political decision makers. The EU Commission has no clear and very often contradictory positions on bioplastics. Member State positions on bioplastics also vary a lot and, as a result, the regulatory environment is anything but harmonized. Therefore, EUBP very much welcomes the EU Commission’s initiative to develop a framework for bioplastics as requested in the Green Deal. However, it is important that this framework sufficiently reflect the benefits bioplastics can provide. The framework process is a great opportunity for our industry. The current revision of the Packaging and Packaging Waste Directive (PPWD) and the Waste Framework Directive (WFD) provide additional chances for bioplastics.
In July 2021, the Single-use Plastics Directive (SUPD) came into effect which had a strong impact not only on the bioplastics industry but on the entire plastic industry in Europe. The EU directive banned a number of single-use plastic applications, such as straws, cutlery, and EPS take-away boxes. However, it also correctly prohibited the use of any kind of oxo-degradable plastic products. While the original intention of this legislation, to reduce the negative effects of plastic waste for the environment, was strongly supported by the whole bioplastics industry, the final legal text caused a maximum of confusion and uncertainty amongst consumers, Industry clients, and bioplastic producers. Unfortunately, the SUPD refuses to make a differentiated distinction between conventional plastic and bioplastic. Due to a lack of guidance by the EU Commission, the SUPD implementation process in the individual Member States created a legal patchwork carpet which is liable to have a negative effect on the European Single Market. Hence, European Bioplastics expects a timely revision of this EU directive and asks for a much more differentiated approach which acknowledges the important role of bio-based as well as biodegradable and compostable plastics in a circular economy. The current version only hinders an innovative and sustainable polymer production in Europe.

From a European perspective, a significant improvement of the regulatory framework conditions is crucial to help maintain Europe as a relevant production site as well as a market for bioplastics. The latest EUBP market data, which was recently presented during the annual EUBP Conference, indicates that Asia continues to further expand its position as the leading region for the production of bioplastics. Asia’s current share in global production amounts to almost 50 per cent and is expected to increase to over 70 per cent by 2026. Conversely, Europe, which currently ranks second with a significantly smaller share of 24 per cent, could further shrink to only below 17 per cent.